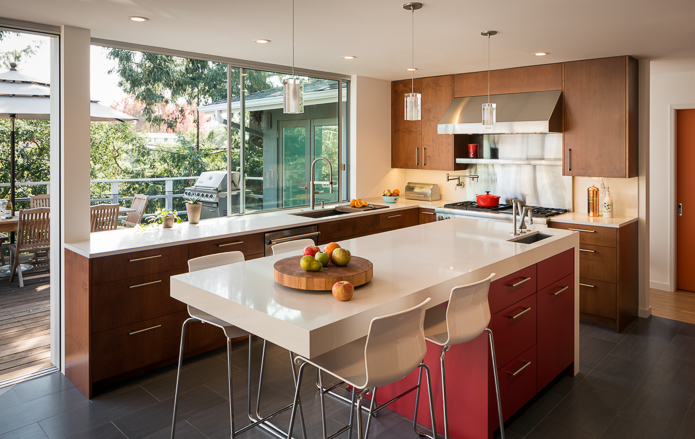 Obviously there’s a lot of natural light in play here. We bounced some of that back into the near side of the island, and added a bit to the cabinetry under the window. You can see how the backs of the stools really throw light back onto the edge of the cantilevered part of the island.

This is an example of a really beautifully designed kitchen. Stephen Shoup of Building Lab did a wonderful job of creating a modern, functional space while staying aesthetically true to the Mid-Century Modern bones of the house.

We photographed this kitchen in early October, and I was immediately struck by the cantilevered island and red cabinetry, as well as the enormous openings leading outside to the large deck.

This is always a challenging shot, as we had to light the interior to match the sunlight exposure of the deck, but without being too obvious about it.

With the multi-paneled sliding doors fully open, along with the very large window, the deck joins the kitchen and adjacent family room in an open floor plan. It’s incredibly inviting and must be an absolute joy to live in. 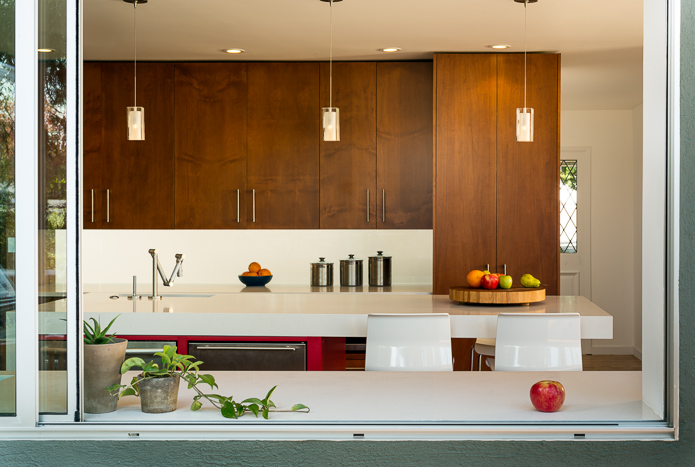 We backlit the translucent glass backsplash but made sure there was a gentle gradient from left to right for a more natural appearance.

We identified shots that would show off the features of the kitchen but which would also emphasize that indoor-outdoor aspect as much as possible.

And, just to make sure everyone understood that the rear backsplash was actually translucent glass, we shot the reverse angle:

This entry was posted in In The Field and tagged building lab, indoor outdoor, kitchen, mid century modern, red, styling. Bookmark the permalink.

One response to “Mid-Century Modern Kitchen, Upgraded by Building Lab”